This explosion on wax is a special release that is long overdue. ANINOKO bring their San Francisco wrath. NAMATAY SA INGAY delivers their New York City furor. Together they combine the Pinoy immigrant experience fusing together 4-songs on one fierce 7” split record.

SIDE A
ANINOKO explode with two ripping tracks. “Paghugpong” introduces the split with blitzing riffs and lightning drums powering through this 1:22-minute swarm. It’s full of attack and style with vocals that scream for unity across the people of the Philippines grappling through

internalized cultural inferiority and cycles of oppression – one of the many symptoms of colonization. ANINOKO blasts through with pure angst, slicing up-tempos with unprocessed rage.

Thumping drums and bass begin the second track, “Alipin Ng Mundo.” The pace escalates into a flurry of drum rolls as the song detonates into a charged kick to the skull. This song viciously addresses the continued exploitation of immigrant women by first-world bosses. Battering notes and frenzied vocals scream “Hindi kame mga alipin / mga alipin ng mundo!” “We are not slaves/slaves of the world!”

SIDE B
NAMATAY SA INGAY unleashes their charge, bashing through the speakers with two roaring songs in Tagalog. “Pagtapos Ng Apoy” is a fast, aggressive number with growling chants and driving rhythms. The sound is merged with saw cutting guitars and breaking, raspy vocals keeping this recording lively and true. “Pagtapos Ng Apoy,” meaning “After the Fire” calls out a rotting system that has existed far too long. We wouldn’t expect anything less than this high-velocity song to introduce their side of the record.

Their second track, “Ngayon Ay Bukas,” begins with deep driving bass riffs over simmering feedback giving the cue that something menacing is about to go down. Blasting into controlled havoc, the song breaks into smashing drums mixed with snarling vocal incursions complimenting a course, full-steaming temperament. Jackie Mariano (MATERIAL SUPPORT) takes over guest vocal charges, giving this piece a cutting touch at the end. NAMATAY SA INGAY conveys their message with raw, untamed attack leaving you wanting more the way good songs are supposed to. 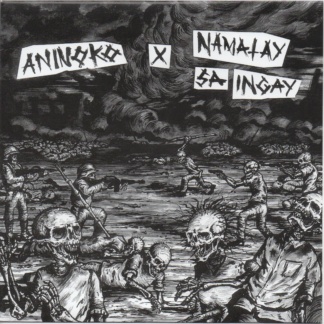